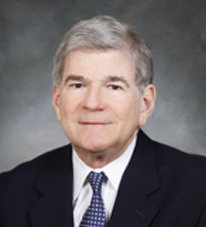 Mr. Forsyth has been listed in the bankruptcy law section of Best Lawyers in America since 1995, and was selected as its 2017 "Lawyer of the Year" in the practice area of Bankruptcy and Creditor Rights/Insolvency and Reorganization in New Orleans. Mr. Forsyth has also been named in the Chambers & Partners Client Guide since 2005 as one of America's Leading Lawyers for Business in the area of business bankruptcy, where he was also noted for his expertise in real estate litigation.  He is a member of the American Bankruptcy Institute and various subcommittees of the Business Bankruptcy Committee of the American Bar Association’s Section of Business Law. He served as a contributing author to the Wiley Bankruptcy Law Update (1998 and 1999 editions). Previously he was a member of the Commercial Law League of America.

Mr. Forsyth has been an associate member of the International Council of Shopping Centers (ICSC), the trade organization of the shopping center industry, for many years. He served for several terms as the ICSC’s Louisiana State Governmental Affairs Committee Chairman. He is currently a member of its Bankruptcy Task Force and its Economic Subcommittee and serves on its Law Advisory Committee. He has written articles and spoken on panels for programs sponsored by the ICSC and by the American Bankruptcy Institute about legal problems relating to bankruptcy and its impact upon shopping center leases.

Mr. Forsyth’s practice has included bankruptcy reorganization in the mass tort context. He has acted as counsel for the Future Claimants’ Representative in a large asbestos-driven Chapter 11 reorganization proceeding. The goal and purpose of that case was the confirmation of a plan of reorganization under the specialized section 524(g) of the Bankruptcy Code dealing exclusively with asbestos-related bankruptcy proceedings.

Mr. Forsyth has served on an advisory committee for continuing legal education programs sponsored by Tulane Law School in the area of bankruptcy. He has spoken at various seminars sponsored by the Louisiana Bankers Association on bankruptcy issues, particularly the impact of the Bankruptcy Code on Louisiana security devices, executory contracts and leases, loan documentation, work-outs, and bankruptcy. He has also been written about, consulted for and quoted in various publications on shopping center and bankruptcy issues. He served on a local advisory committee selected by the United States District Court for the Eastern District of Louisiana for the promulgation of local bankruptcy rules.

In addition to the practice areas described above, Mr. Forsyth’s practice has also included the defense side of products liability litigation. In connection with that practice, he was a member of the Products Liability Advisory Council (PLAC), an organization of select product manufacturers and their attorneys.

Mr. Forsyth’s practice has also included the defense of media organizations in defamation and other First Amendment litigation. That experience resulted in his becoming a member of the Media Law Resource Center (MLRC), formerly known as the Libel Defense Resource Center (LDRC). The members of that organization regularly represent national media organizations in an array of First Amendment matters. Mr. Forsyth has served as a co-author of the Louisiana libel law section of the LDRC’s annual nation-wide survey of libel laws in all of the United States.

He is a former Secretary, Vice-Chairman, and Chairman (1983-1984) of the Corporation and Business Law Section of the Louisiana Bar Association. He also served on the Bank Counsel Committee of the Louisiana Bankers Association and on that organization’s Task Force, which was formed in connection with Louisiana’s adoption of Article 9 of the Uniform Commercial Code relating to secured financing in Louisiana.